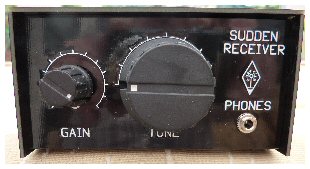 The Limerick Sudden is built around two integrated circuit chips; the SA602 and the LM386. Both lend themselves to simple receiver construction; although neither has particularly high performance in that application. Having said that, the Sudden is a remarkable receiver for what it contains. The original Sudden, designed by G3RJV, began life over 20 years ago in SPRAT and was then published in Practical Wireless followed by the "73" magazine in the U.S.A. Since then several versions and modifications to the Sudden receiver have been written up; although very few of them were written by George. The original naming of the "Sudden" had nothing to do with "rapidity" or "hastiness" but was taken from the name of the place where G3RJV lived and worked.

The SPRAT version was available as a kit from Kanga Products. The kit proved very popular with beginners and several groups used it as a training 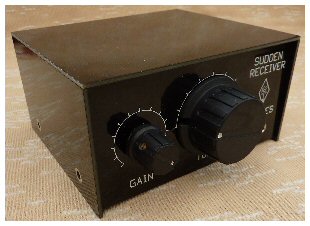 project with young people. There was even a surface mount version; produced for a while by Blue Rose Electronics. In more recent times a version of the receiver was packaged in a tuna tin on a circular printed circuit board and called “The Sudden Storm” by W1REX at qrpme.com.

This club version of the Sudden is a re-think of the original design by George G3RJV, this time with a VFO to cover the full band, and minor improvements to the circuitry. The kit uses a new method of construction, based on "Manhattan" design, but called Limerick. With this method, developed by Rex, W1REX, (who lives in Limerick, Maine), the pads are etched on the board, and the interconnections between them are PCB tracks, hidden under the solder masking. No "through hole" connections are used, although" through hole" components are used, neither are there any coils to wind, as manufactured coils are used. The kit includes all components, the complete case, and even a PP3 battery. All you need to supply is a soldering iron and solder, and a few simple hand tools. The iron should be of a reasonable size, as the case is made by soldering the parts together, and a low power iron will not be "man" enough. The completed receiver needs a reasonable antenna, and a pair of walkman style earphones, although the audio stage will drive a small loudspeaker in a quiet room. Although the original Sudden was for 40m, the club kits are available in 160m, 80m, 40m, 30m, or 20m versions.